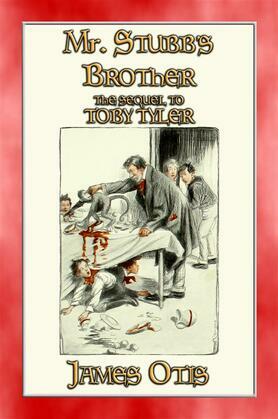 James Otis was the pen name of James Otis Kaler (1848 - 1912), as a journalist he reported on the Civil War and was a prolific author of children's books, including many a series title. His best known book was "Toby Tyler, or Ten Weeks With a Circus", written in 1880. Toby Tyler was the first in a trilogy of books about the mischievous youth. "Mr. Stubbs' Brother" is the sequel to "Toby Tyler", and is also concerned with circus life. James Otis, himself, was involved with a real-life circus as a publicist, so he was able to bring an experienced realism to his story.

This volume commences with Toby and his gang of friends at a loose end and are trying to think up things to do, until someone suggests that as Toby has circus experience that under his direction they could start a circus. They take advice from Bob Atwood and with a final blessing from Uncle Daniel, the show is on. The boys set about borrowing animals from around the neighbourhood and also select the area on which to hold the event.

But events overtake them as Toby’s old circus rolls into town. He reacquaints himself with old friends and meets the brother of Mr Stubbs, his former pet monkey. And that’s when things begin to get interesting…………

10% of the publisher’s profit will be donated to Charities.