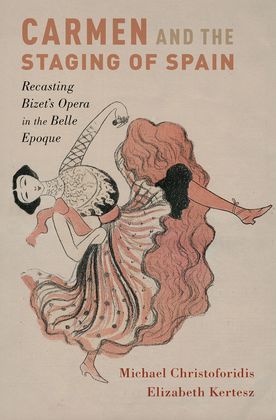 Carmen and the Staging of Spain

by Michael Christoforidis (Author), Elizabeth Kertesz (Author)
Excerpt
Nonfiction Arts Music Opera History & criticism
warning_amber
One or more licenses for this book have been acquired by your organisation details

Carmen and the Staging of Spain explores the Belle Époque fascination with Spanish entertainment that refashioned Bizet's opera and gave rise to an international "Carmen industry." Authors Michael Christoforidis and Elizabeth Kertesz challenge the notion of Carmen as an unchanging exotic construct, tracing the ways in which performers and productions responded to evolving fashions for Spanish style from its 1875 premiere to 1915.

Focusing on selected realizations of the opera in Paris, London and New York, Christoforidis and Kertesz explore the cycles of influence between the opera and its parodies; adaptations in spoken drama, ballet and film; and the panorama of flamenco, Spanish dance, and musical entertainments. Their findings also uncover Carmen's dynamic interaction with issues of Hispanic identity against the backdrop of Spain's changing international fortunes.

The Spanish response to this now most-Spanish of operas is illuminated by its early reception in Madrid and Barcelona, adaptations to local theatrical genres, and impact on Spanish composers of the time. A series of Spanish Carmens, from opera singers Elena Sanz and Maria Gay to the infamous music-hall star La Belle Otero, had a crucial influence on the interpretation of the title role. Their stories provide a fresh context for the book's reappraisal of leading Carmens of the era, including Emma Calvé and Geraldine Farrar.