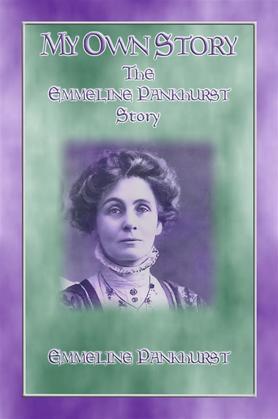 MY OWN STORY - The Emmeline Pankhurst Story

The closing paragraphs of this book were written in the late summer of 1914, when the armies of every great power in Europe called upon their citizens, and the citizens of their colonies, to mobilised for savage, unsparing, barbarous warfare against one another, against small and unaggressive nations, against helpless women and children, and against civilisation itself.

How mild, by comparison with the despatches in the daily newspapers, will seem this chronicle of women's militant struggle against political and social injustice in one small corner of Europe. Yet, let it stand as it was written, with peace—so-called, and civilisation, and orderly government as the background for heroism such as the world has seldom witnessed.

The militancy of men, through all the centuries, has drenched the world with blood, and for these deeds of horror and destruction men have been rewarded with monuments, with great songs and epics. Yet, the militancy of women has harmed no human life save the lives of those who fought the battle of righteousness. Time alone has revealed what reward has been allotted to the women.

In the black hour that struck in Europe, the men, indeed Governments, turned to their women and called on them to take up the work of keeping civilisation alive. Through all the harvest fields, in orchards and vineyards, women garnered food to send to the front, as well as for the children left fatherless by war. In the cities the women kept open the shops, drove trucks and trams, and operated machines in the factories which made clothing and the munitions for the impending battle ahead and altogether attended to a multitude of tasks to keep the wheels of commerce turning.

At the first alarm of war, the militants proclaimed a truce, which was answered half-heartedly by Reginald McKenna, the Home Secretary’s announcement that all suffrage prisoners would be released who gave an undertaking "not to commit further crimes or outrages." A few days later, no doubt influenced by representations made to the Government by men and women of every political persuasion, Mr. McKenna announced in the House of Commons that it was the intention of the Government, to release unconditionally, all suffrage prisoners. So ended, for a short time, the war of women against men – until the clash of arms ceases. Then once more women will take up the arms they so generously laid down.

“There can be no real peace in the world until woman, the mother half of the human family, are given liberty in the councils of the world” – Emmeline Pankhurst.

10% of the profit from the sale of this book will be donated to charity.