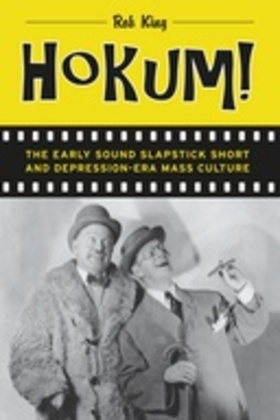 Hokum!, the first book to take a comprehensive view of short-subject slapstick comedy in the early sound era, challenges the received wisdom that sound destroyed the slapstick tradition. Author Rob King explores the slapstick short’s Depression-era development against a backdrop of changes in film industry practice, comedic tastes, and moviegoing culture. Each chapter is grounded in case studies of comedians and comic teams, including the Three Stooges, Laurel and Hardy, and Robert Benchley. The book also examines how the past legacy of silent-era slapstick was subsequently reimagined as part of a nostalgic mythology of Hollywood’s youth.

“A valuable contribution to historiography in its ability to fill a hole in contemporary film history, increasing our understanding of both the (perceived) narrowed place of the comedy film short in the 1930s and the production and reception of slapstick comedy during that era.” KATHRYN FULLER-SEELEY, Professor of Radio-Television-Film, University of Texas at Austin

“With solid research, jewel-like prose, and plenty of wry humor, Rob King convincingly busts the myths and chases away the nostalgia for silent film comedy. Instead, we leave with a lasting sense of the form’s persistent cultural relevance.” DONALD CRAFTON, author of Shadow of a Mouse

“Hokum! moves deftly through questions of performance, aesthetics, technology, political economy, trade practices, and popular reception to convincingly unseat deeply entrenched understandings of the transition to sound and its impact on the history of screen comedy. This book is some of the smartest film history being written today.” MARK LYNN ANDERSON, author of Twilight of the Idols

ROB KING is Associate Professor at Columbia University’s School of the Arts and author of the award-winning The Fun Factory: The Keystone Film Company and the Emergence of Mass Culture.