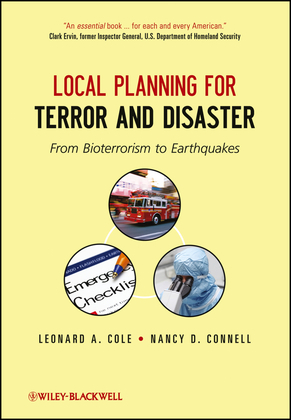 Local Planning for Terror and Disaster: From Bioterrorism to Earthquakes

by Leonard A. Cole (Author), Nancy D. Connell (Author)
Buy for $92.00 Excerpt
Nonfiction Science and technics Science Life sciences Biology Microbiology
warning_amber
One or more licenses for this book have been acquired by your organisation details

Local Planning for Terror and Disaster gives voice to experts in key fields involved with local preparedness, assessing the quality of preparedness in each field, and offering directions for improvement. Introductory chapters provide overviews of terror medicine, security and communications, which are indispensable to successful preparedness, while subsequent chapters concentrate on a particular field and how responders from that field communicate and interact with others during and after an event. Thus, a chapter by a physician discusses not only the doctor's role but how that role is, or should be, coordinated with emergency medical technicians and police. Similarly, chapters by law enforcement figures also review police responsibilities and interactions with nurses, EMTs, volunteers and other relevant responders.

Developed from topics at recent Symposia on Terror Medicine and Security, Local Planning also encompasses aspects of emergency and disaster medicine, as well as techniques for diagnosis, rescue, coordination and security that are distinctive to a terrorist attack. Each chapter also includes a case study that demonstrates preparedness, or lack thereof, for a real or hypothetical event, including lessons learned, next steps, and areas for improvement in this global era which increasingly calls for preparedness at a local level.