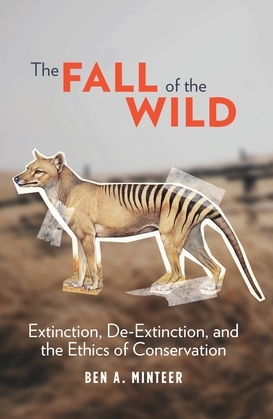 The Fall of the Wild

The passenger pigeon, the great auk, the Tasmanian tiger—the memory of these vanished species haunts the fight against extinction. Seeking to save other creatures from their fate in an age of accelerating biodiversity loss, wildlife advocates have become captivated by a narrative of heroic conservation efforts. A range of technological and policy strategies, from the traditional, such as regulations and refuges, to the novel—the scientific wizardry of genetic engineering and synthetic biology—seemingly promise solutions to the extinction crisis.

In The Fall of the Wild, Ben A. Minteer calls for reflection on the ethical dilemmas of species loss and recovery in an increasingly human-driven world. He asks an unsettling but necessary question: Might our well-meaning efforts to save and restore wildlife pose a threat to the ideal of preserving a world that isn’t completely under the human thumb? Minteer probes the tension between our impulse to do whatever it takes and the risk of pursuing strategies that undermine our broader commitment to the preservation of wildness. From collecting wildlife specimens for museums and the wilderness aspirations of zoos to visions of “assisted colonization” of new habitats and high-tech attempts to revive long-extinct species, he explores the scientific and ethical concerns vexing conservation today. The Fall of the Wild is a nuanced treatment of the deeper moral issues underpinning the quest to save species on the brink of extinction and an accessible intervention in debates over the principles and practice of nature conservation.