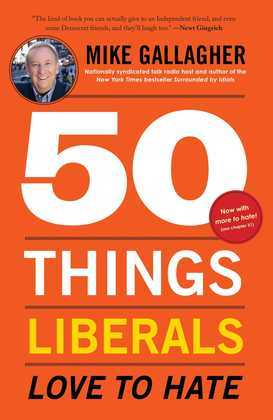 America, how does the liberal hate thee? Let us count the ways . . .

It’s hard work being a liberal these days. Not only do a mere 20 percent of Americans identify themselves as liberal, but one could go broke supporting a skinny double-decaf Starbucks habit. On top of that, when you hate things most Americans love, it’s tiring to have to endlessly correct/educate/fix/enlighten the poor dullards out there who just want to enjoy their lives. Which, taken as a whole, makes the average liberal lonely, short on cash, and mad as hell! So, in the spirit of the compassion they themselves espouse, 50 Things Liberals Love to Hate is truth spoken with love, an invitation to the disenfranchised: it’s not too late, liberals, to join the fun! C’mon, crack open a Bud and throw another T-bone on the grill. But kindly check your disdain at the door when it comes to:

WALMART: How about a handmade, locally sourced flat-screen television instead?

STEAKHOUSES: There’s no steamed tofu on this menu.

McDONALD’S: The stranger in the playground handing out candy to children.

FLAG PINS: It’s okay to love America, but not enough to wear it on your lapel.

FOOTBALL: War with cleats and pads.

THE V-8 ENGINE: There’s just something plain wrong about all that power and freedom under the control of one person.

SUCCESS: When you make more money than the rest of us, it hurts our feelings.

THE FOUNDING FATHERS: A bunch of old white guys who are making it nearly impossible for modern government to pick our doctors, teach our children, correct our diets, and save our money.

. . . and 42 other things that have liberals packing some serious hate. Mike Gallagher—America’s sixth-ranked radio talk show host and Fox News contributor—skewers liberal lunacy with cutting irony and scathing wit. Here are 50 warning signs of a liberal mind implosion, all darn good reasons to lock the doors, crank up the A/C, turn on the game, and let the countdown begin. . . .