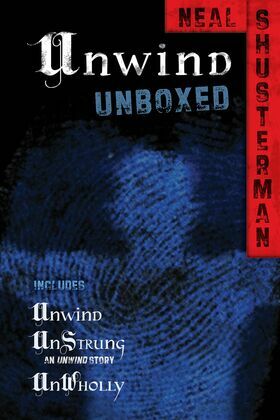 Get caught up in the world of Unwind with this eBook collection of Unwind; its sequel, UnWholly; and a bonus companion story.

In the world of Unwind, to be a teenager is to risk being unwound?having your body dismantled and all the parts distributed for transplant. This eBook collection includes Unwind; UnStrung: an Unwind story; and UnWholly.

In Unwind, follow the breathtaking adventures of three teens on the run: Connor, a rebel whose parents have ordered his unwinding; Risa, a ward of the state who is to be unwound due to cost-cutting; and Lev, his parents? tenth child, whose unwinding has been planned since birth as a religious tithing.

Between the end of Unwind and the beginning of its sequel, UnWholly, there is UnStrung?an exclusive short story that provides an unprecedented look at how Lev becomes someone willing to do the unthinkable.

And in UnWholly, Connor, Lev, and Risa meet Cam?a futuristic Frankenstein made entirely out of the parts of other Unwinds?and question humanity itself in the process.