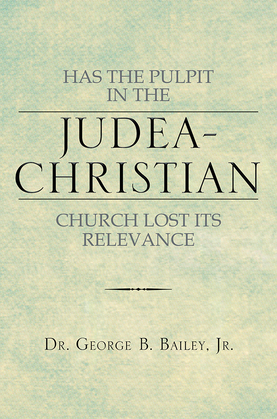 Has the Pulpit in the Judea-Christian Church Lost Its Relevance

by Dr. George B. Bailey Jr. (Author)
Buy for $3.99 Excerpt
Nonfiction Religion Judaism
warning_amber
One or more licenses for this book have been acquired by your organisation details

HAVE THE PULPIt IN THE JUDEA-CHRISTIAN CHURCH LOST ITS RELEVNACE
Historical and contemporary evidence reveals there are more Christian Churches in the United States of America than any other nation, and there is a pulpit in each of these churches, but it evident the messages being preached from each Church is not the same as God has ordained. It is not that Americans do not know where the local churches are located, and what Jesus Bride, the Judea-Christian Church was established by Him to be the Salt of the earth, that is seasoning power to encourage godly living, for this was demonstrated in living colors during 9-11-2000 during a vicious attack on our nation by our sworn enemy radical Islam; for three months the local Judea-Christian churches were capacity filled ever Sunday morning for regular worship services. Criminal activity inside and outside the correction systems was reframed, but as soon as it was realized that America was not going to be destroyed in the foreseeable future, you guessed it, we returned to our corrupt and criminal conduct.
As I travel our nation, I visit local Christian churches and here the men and women preaching from behind the pulpit, but the messages being preached are not at all in many instances the message God has ordained for the healing our nation. What, Why, When, Where, and How did we allow false preaching to become acceptable from behind Gods consecrated pulpit in the Judea-Christian Church? The results are NO JESUS CHRIST, NO CHRISTIAN CHURCH; NO CHRITIAN CHURCH, NO OBLIGATION TO GOD. The Judea-Christian communities have began to ignore the Holy Bible, Gods inerrant Word, and is replaced with entertainment instead of worship and praise unto God, and the Word o God has been watered down to meet the standards of the world. It is imperative that the pulpit in the Judea-Christian Church return to preaching the gospel as God has ordained, for only the Word of God can change the heart-mind of men, women, boys, and girls from the flesh desires to the desires of the Holy Spirit.