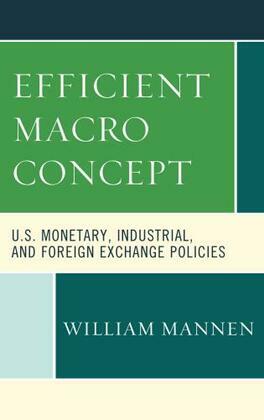 The United States has had a tumultuous monetary and banking history. The bitter Bank War during Andrew Jackson’s presidency meant that the country never developed a central bank in the 1800s. The pre–Civil War monetary standard was deflationary until the fortuitous California gold discovery. Political turmoil erupted later in the nineteenth century over whether the government should freely coin silver. Meanwhile, Congress imposed a banking system that virtually drove bank reserves into stock market speculation. Even when the Federal Reserve was finally established in 1913, it was initially decentralized and unable to effectively respond to the Great Depression. From this narrative emerges a money supply increasingly managed by central banking authorities and increasingly nationalized with the end of the gold standard. Efficient Macro Concept: U.S. Monetary, Industrial, and Foreign Exchange Policies shows that the next step forward is a set of industrial and foreign exchange policy options for driving real growth in the economy. Stronger economic growth is possible through specialized institutions and transactions rooted in the tradition of central banking but flexible and compatible with free enterprise and balanced budgets.