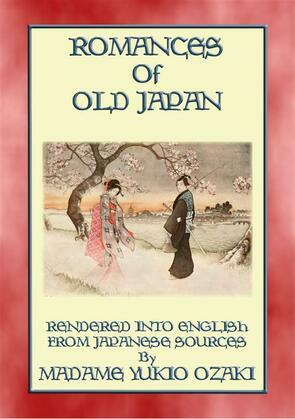 In this volume you will find a collection of 11 romances from old Japan rendered into English by Yei Theodora Ozaki. This volume is full of tales of honor, adventure, tragedy, and romance. Not only are these good stories, and well told to boot, this volume will, without a doubt, give anyone interested in Japanese culture and literature an insightful and pleasurable experience.

To accompany the stories and bring them to life are 15 colour illustrations, plus 16 grey-scale illustrations exquisitely drawn by an unknown illustrator.

Herein you will find the stories of:

The Quest Of The Sword

The Tragedy Of Kesa Gozen

The Spirit Of The Lantern

The Reincarnation Of Tama

The Lady Of The Picture

Urasato, Or The Crow Of Dawn

Loyal, Even Unto Death; Or The Sugawara Tragedy

How Kinu Returned From The Grave

The volume also contains numerous footnotes which help give readers a greater understanding of the story and the Japanese culture.

BIOGRAPHY Yei Theodora Ozaki (Eiko Seodora Ozaki), 1871 – December 28, 1932) was an early 20th-century translator of Japanese short stories and fairy tales. Her translations were fairly liberal but have been popular, and were reprinted several times after her death.

According to "A Biographical Sketch" by Mrs. Hugh Fraser, included in the introductory material to Warriors of old Japan, and other stories, Ozaki came from an unusual background. She was the daughter of Baron Ozaki, one of the first Japanese men to study in the West, and Bathia Catherine Morrison, daughter of William Morrison, one of their teachers. Her parents separated after five years of marriage, and her mother retained custody of their three daughters until they became teenagers. At that time, Yei was sent to live in Japan with her father, which she enjoyed. Later she refused an arranged marriage, left her father's house, and became a teacher and secretary to earn money. Over the years, she traveled back and forth between Japan and Europe, as her employment and family duties took her, and lived in places as diverse as Italy and the drafty upper floor of a Buddhist temple.

All this time, her letters were frequently misdirected to the unrelated Japanese politician Yukio Ozaki, and his to her. In 1904, they finally met, and soon married.

10% of the profit from the sale of this book will be donated to charities.