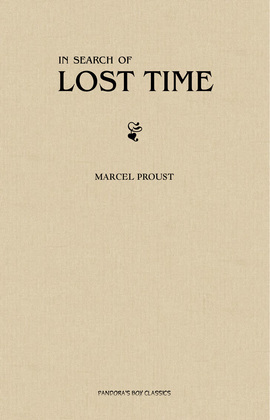 On the surface a traditional Bildungsroman describing the narrator’s journey of self-discovery, this huge and complex book is also a panoramic and richly comic portrait of France in the author’s lifetime, and a profound meditation on the nature of art, love, time, memory and death. But for most readers it is the characters of the novel who loom the largest: Swann and Odette, Monsieur de Charlus, Morel, the Duchesse de Guermantes, Françoise, Saint-Loup and so many others — Giants, as the author calls them, immersed in Time.
In Search of Lost Time is a novel in seven volumes. The novel began to take shape in 1909. Proust continued to work on it until his final illness in the autumn of 1922 forced him to break off. Proust established the structure early on, but even after volumes were initially finished he kept adding new material, and edited one volume after another for publication. The last three of the seven volumes contain oversights and fragmentary or unpolished passages as they existed in draft form at the death of the author; the publication of these parts was overseen by his brother Robert.

“In Search of Lost Time” is widely recognized as the major novel of the twentieth century. —Harold Bloom
At once the last great classic of French epic prose tradition and the towering precursor of the “nouveau roman”. —Bengt Holmqvist
I am in a state of amazement; as if a miracle were being done before my eyes… Proust so titillates my own desire for expression that I can hardly set out the sentence. Oh if I could write like that! —Virginia Woolf
The greatest fiction to date. —W. Somerset Maugham
Proust is the greatest novelist of the 20th century. —Graham Greene
Our second greatest novel after “War and Peace”. —E. M. Forster