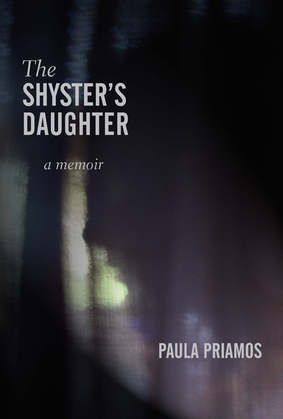 "Paula Priamos' The Shyster's Daughter is a wonderfully written charged memoir—utterly absorbing and packed with sharp details. Direct, evocative, emotionally honest, brave, and funny, Priamos' voice shines. The Shyster's Daughter is a suspenseful investigative journey, but its emotional core vibrates with Priamos' homage to her deeply flawed and deeply loved father, and to their complicated and enduring relationship."—Victoria Patterson, author of This Vacant Paradise and Drift

The last time my father calls is shortly before the anniversary of his disbarment to tell me he's just cheated death. On his end, there's background noise—a restaurant, a bar or somewhere far sleazier. Since the divorce he licks his wounds at a topless strip club in Garden Grove called the Kat Nip.

The Shyster's Daughter is a detective memoir of a Greek family living in Southern California in the late 1900s. The author, whose father was an attorney with clients who were often questionable characters knowing a side of him unseen by his family, looks into his death and finds more questions than answers.

Paula Priamos' writing has been featured in various magazines and in the anthology Naming the World: And Other Exercises for the Creative Writer. She teaches at California State University and lives in Southern California with her husband and stepsons. This is her first book.