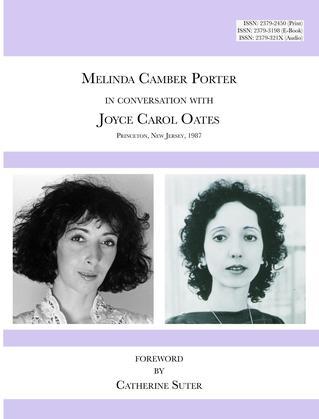 "Melinda Camber Porter in Conversation with Joyce Carol Oates This conversation between Melinda Camber Porter and Joyce Carol Oates took place on a late afternoon in Princeton, N.J. in 1987. It coincided with the publication of Joyce Carol Oates’ collection of essays entitled “On Boxing,” and while it later became a published interview in the London Times, this unedited interview covers a range of intriguing topics not included in the published version. Adding to the depth of the interview is the fact that Melinda Camber Porter, also an accomplished writer and painter, was born and raised in London and worked as a journalist in Paris for ten years. This status gave her a unique perspective on American culture and it’s clear that Oates and Camber Porter find common ground in their observations on society. Their conversation is wide-ranging and illuminating, and readers will come away with an increased appreciation of both Melinda Camber Porter and Joyce Carol Oates. They discuss American culture; the continuous current of anti-intellectualism and the notion of celebrity as an end in itself. In the most prescient part of the discussion, Oates observes that American politics veers from pragmatism to idealism and that our national identity is in part founded on gimmicks, machines and money. She refers in the same sentence to Donald Trump, P.T. Barnum, and Henry Ford. Although the year was 1987, Trump had already made an impression as an emerging cultural force, embodying a new kind of celebrity status. And Joyce Carol Oates shows that she had her finger on this pulse. Early in the interview we learn that Oates accompanied her father to boxing matches as a child of nine or ten, “when she had no critical sense”. And although the interview doesn’t explore the effect this might have had on the adult writer, it stands to reason that witnessing routine violence at such a young age might create a distinct worldview. The destructive energy that Oates witnessed as a young child during boxing matches and her years of teaching in the inner cities of Detroit probably contribute to the presence of recurrent themes of violence in her work. Her National Book Award winning novel Them, which follows three generations of a very troubled, impoverished family, was inspired by a student in one of her writing classes in Detroit. Interestingly, Oates wrote an essay for The New York Times expressing dismay at how often she is questioned about the themes of violence in her writing. Maintaining that a male author would not be asked the same question, she reasons that readers expect men to explore the larger, difficult social issues, while women are expected to confine themselves to the more domestic uplifting spheres. There seems to be truth in her opinion since the same controversy has swirled around the work of Elena Ferrante, author of the bestselling Neapolitan Novels, with people insisting that only a man could have written of violence so accurately. This is what what makes this volume so interesting; in getting to the heart of the activity of boxing they are also delving into the question of violence in society and the whole enterprise of a woman taking on this subject. According to Oates, the process of being a woman writing about boxing is a kind of feminist inquiry because it’s uncharted territory for a woman writer. And finally, circling back to a discussion of the creative process, Camber Porter prompts a wonderful metaphor for the process of writing and the sensation of writer’s block. Oates compares it to mowing very wet, chunky grass with a hand mower, pushing through big patches of lawn and having to go over it again and again, until getting it just right." Foreward by Catherine Suter Artist and Writer East Hampton, NY 2017. www.MelindaCamberPorter.com