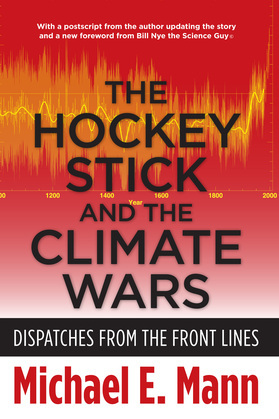 The Hockey Stick and the Climate Wars

The ongoing assault on climate science in the United States has never been more aggressive, more blatant, or more widely publicized than in the case of the Hockey Stick graph—a clear and compelling visual presentation of scientific data, put together by MichaelE. Mann and his colleagues, demonstrating that global temperatures have risen in conjunction with the increase in industrialization and the use of fossil fuels. Here was an easy-to-understand graph that, in a glance, posed a threat to major corporate energy interests and those who do their political bidding. The stakes were simply too high to ignore the Hockey Stick—and so began a relentless attack on a body of science and on the investigators whose work formed its scientific basis.

The Hockey Stick achieved prominence in a 2001 UN report on climate change and quickly became a central icon in the "climate wars." The real issue has never been the graph's data but rather its implied threat to those who oppose governmental regulation and other restraints to protect the environment and planet. Mann, lead author of the original paper in which the Hockey Stick first appeared, shares the story of the science and politics behind this controversy. He reveals key figures in the oil and energy industries and the media frontgroups who do their bidding in sometimes slick, sometimes bare-knuckled ways. Mann concludes with the real story of the 2009 "Climategate" scandal, in which climate scientists' emails were hacked. This is essential reading for all who care about our planet's health and our own well-being.