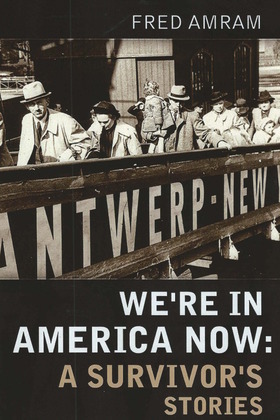 "Epic in scope, but gentle and charming in delivery, Fred Amram's We're in America Now is a quiet chronicle of a clamorous era. Politics and war compel Amram's family to leave the only home they ever knew and embark on a personal exodus, fleeing a new pharaoh, pursuing a new promised land. They arrive in America to discover that paradise is not all milk and honey, but love, loyalty, and faith conspire to hold the family together, and the story of how they rebuild the life that was robbed them is moving, probing, and insightful." —J.C. Hallman, author of B & Me: A True Story of Literary Arousal

These compelling stories form a riveting memoir that begins with the author's birth during the rise of Hitler in 1930s Germany. He and his surviving family soon escape to Holland and sail to America where they encounter many challenges as immigrants in a new world. This country truly becomes a land of opportunity where one can build a new life and become more than a "Holocaust survivor."

Fred Amram is a retired University of Minnesota professor of communication and creativity. He spent his early years in Hanover, Germany, where he experienced the Holocaust from its inception in 1933. He witnessed Kristallnacht and the Gestapo invading his home. He watched the British bombers from his balcony when Jews were banned from air raid shelters. The loss of uncles, aunts, a grandmother, and many more relatives has motivated him to share his experiences in hopes of ending genocide everywhere.