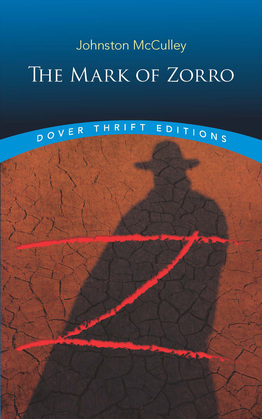 The Mark of Zorro

by Johnston McCulley (Author)
Buy for $5.00 Excerpt
Fiction Classics Media tie-in Action & adventure
warning_amber
One or more licenses for this book have been acquired by your organisation details
Timid Don Diego Vega grows faint at even the mention of bloodshed and would rather read poetry than defend his own honor. No one suspects that the effete aristocrat is living a double life as Zorro the fox, bold fighter of injustice, whose sword is ever ready to defend the poor and oppressed against a corrupt governor and his merciless army. Zorro's charade fools even the spirited Lolita Pulido, whose father forces her to endure the listless wooing of Don Diego while her heart belongs to the masked hero who laughs in the face of danger.
This lighthearted tale of the Robin Hood of Old California unfolds as a suspenseful romp across Los Angeles of the 1820s. Loaded with colorful characters and historic atmosphere, recounted in direct and unpretentious prose, the pulp adventure offers a winning balance of action, comedy, and romance. This edition reprints the original 1919 story, published serially as "The Curse of Capistrano," which launched the Zorro legend. Scores of sequels followed, along with movie and television versions, all inspired by this swashbuckling classic.
Format
EPUB
Protection
DRM Protected
Publication date
July 20, 2016
Publisher
Dover Publications
Collection
Dover Thrift Editions
Page count
192
ISBN
9780486815176
Paper ISBN
9780486808673