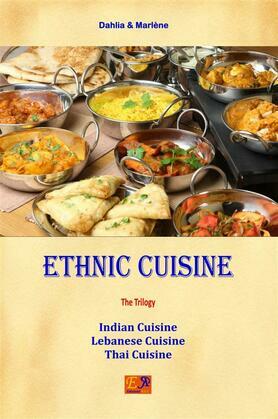 by Dahlia & Marlène (Author)
Buy for €7.99 Excerpt
Nonfiction Cooking Cooking by country Asia India
warning_amber
One or more licenses for this book have been acquired by your organisation details

India is one of the most fascinating and magical regions in the world, is characterized, in fact, as an extraordinarily rich territory of mixtures of different religions and traditions, mixture that is found, and is also present in the kitchen, with special and totally unique dishes of their kind, since surely unmistakable flavor. Indian tables during meals, are laden with several courses that do not follow our order of presentation, but they are placed on the table and everyone can freely choose which to use.

The Lebanese cuisine is perhaps one of the most typical expressions of Middle Eastern cuisine, extremely diverse and heavily influenced by the Arab-Muslim tradition. This is especially noticeable in the prevalence of the use of lamb meat, abundant use of dried fruit, almonds and pine nuts mostly, and condiments made from lemon juice. Lebanese cuisine is a delight for hovering. Using fresh, flavorful ingredients and spices refined, the Lebanese have acquired the best aspects of Turkish and Arabic cuisine giving them a French twist. The soups are light, enriched with lentils and spiced with cinnamon. typical dish is the tabbouleh, a salad of parsley, tomatoes and burghul, with numerous variations, taste very reminiscent of lemon.

The Thai cuisine is characterized by its flavors and its extraordinary variety of ingredients, which make it look like one of the most interesting and fascinating of Asian culture. It is a deli that in some ways is closer to Western culture, is presented as a cuisine that deeply loves mixing the most diverse flavors, to give rise to absolutely wonderful dishes and unforgettable; as Thai cuisine is elegant and refined, the presentation of the dishes on the tables, is not done precisely, following a predetermined order, but all dishes are served at the same time and the guests have a choice of what food to use first.