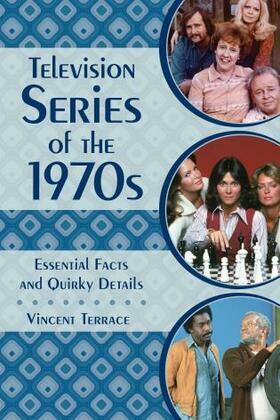 Television Series of the 1970s

Television of the 1970s reflected the shifting attitudes of the nation, as more shows attempted to represent social changes across the country. Edgier programs like All in the Family and M*A*S*H pushed the boundaries of popular programming to become standards of quality viewing. At the same time, the small screen began to acknowledge that viewers were open to more diverse programming, resulting in hit shows like Sanford and Son and Good Times. Some of the most beloved shows of all time originally aired during the 1970s, including Columbo, Happy Days, Little House on the Prairie, and The Mary Tyler Moore Show. Even after these shows departed the airwaves, they live on in syndication and on DVDs, entertaining many generations of viewers.

In Television Series of the 1970s: Essential Facts and Quirky Details, Vincent Terrace presents readers with a cornucopia of information about more than seventy programs from the decade. For example, did you know that Jim Ignatowski on Taxi attended Harvard? Or that John-Boy Walton was a reporter for the Jefferson County Times? Or that Lieutenant Columbo’s favorite sandwich was peanut butter and raisins? These are just a handful of hundreds of fun and intriguing specifics found inside this volume. Programs from all three major networks (ABC, CBS, and NBC)—as well as select syndicated programs—are represented here.

This is not a book of opinions or essays about specific television programs but a treasure trove of facts associated with each show. From Oscar Madison’s middle name on The Odd Couple to Jim Rockford’s license plate number, readers will discover a wealth of fascinating information that, for the most part, cannot be found elsewhere. In some cases, the factual data detailed herein is the only such documentation that currently exists on bygone shows of the era. Television Series of the 1970s is the ideal reference for fans of this decade and anyone looking to stump even the most knowledgeable trivia expert.