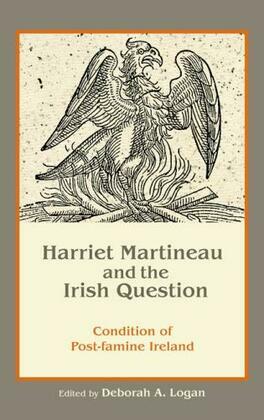 Harriet Martineau and the Irish Question

Aside from Letters from Ireland and Endowed Schools of Ireland, Harriet Martineau wrote an additional thirty-eight articles about Ireland for London's Daily News between 1852 and 1866, plus another thirteen articles for Household Words, Atlantic Monthly, Once a Week, Westminster Review, and New York Evening Post. It is those uncollected articles that are the focus of this study and that compliment her earlier work by providing subsequent commentary on Ireland's post-famine, reconstruction period. Whereas Letters from Ireland (1852) is a structured, sociological travel memoir meant for both periodical and volume publication, and Endowed Schools (1858) addresses a specific aspect of Irish education reform, these articles chart the course of economic and social progress in post-famine Ireland in terms of industry, public works, economy, and agriculture. They also record the growth of Irish nationalism in America and Ireland, while exploring the question of Ireland's political representation during this crucial pre-independence period.

Points highlighted in this study include Martineau's unshakeable optimism about the economic and social recovery of post-famine Ireland, her steady refusal to consider repeal of the Union as a viable option for remedying Ireland's troubles, and her insistence that Ireland's problems were social, not political. Treating social issues as the primary ailment and politics as merely a symptom, Martineau's writing on these topics provides important insights into the challenges facing Ireland during its transition from a feudal society to a modern, independent nation during the period of the British Empire's greatest expansion and swift demise. There are five components comprising her writing on Ireland: Ireland (Illustrations of Political Economy, 1832); History of the Peace, 1849-51; Letters from Ireland (1852); Endowed Schools of Ireland (1858); and the "Condition of Post-famine Ireland" (1852-66). It is the latter that is the focus of this volume.