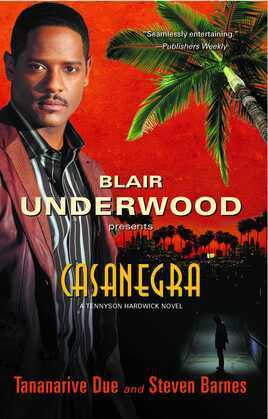 by Blair Underwood (Author), Steven Barnes (Author), Tananarive Due (Author)
Excerpt
Fiction Mystery & detective Media tie-in
warning_amber
One or more licenses for this book have been acquired by your organisation details

An unputdownable and sizzling mystery in the heart of Hollywood, perfect for fans of Devil in a Blue Dress and Miami Vice.

Casanegra follows the adventures of Tennyson Hardwick, a gorgeous, sexy actor and former gigolo, living on the fringes of the good life in Hollywood. This story, which chronicles the redemption of a prodigal son, combines the glamour of Hollywood with the seedy hopelessness of the inner city.

In this hot and steamy mystery, Tennyson struggles to hang on to his acting career and redeem his sex-for-pay history, which estranged him from his family?especially his father, a decorated LAPD captain who raised Tennyson to call him “sir.” Now, in the wake of his father’s sudden stroke, Tennyson has to save himself from taking the fall for the first murder of a female rapper. In the process, he discovers his hidden talents?the hard way.