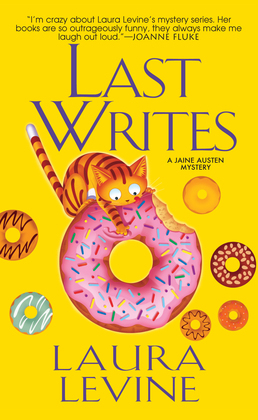 Wisecracking pen-for-hire Jaine Austen is back--and she's about to discover that working on the set of a Hollywood sitcom is no laughing matter. . .

Jaine still hasn't found a good man--or a way to keep all those sugary snacks from going straight to her hips. But--with a little help from her best friend Kandi--she's finally landed a gig as a sitcom writer! True, Muffy 'n Me (aka "Bewitched with Tits") isn't going to win any Emmys. And her office at Miracle Studios needs a little sprucing up, and a few dozen rat traps. But it sure beats writing boring brochures and bad resumes, so Jaine's not complaining. Until the plot thickens--with murder. . .

Jaine figures the trouble all started when Muffy 'n Me's hottest star, gorgeous Quinn Kirkland, seduced the head writer--whose husband also works on the show. But when Quinn's caught in bed with the barely-legal actress who plays his niece, things really heat up--and his many jealous girlfriends start to figure things out. . .

So when the no-good heartthrob drops dead after nibbling a poisoned doughnut, Jaine isn't terribly surprised. But who could have done it? A competitive co-star and a couple of scorned lovers top Jaine's list of suspects, but the police have zeroed in on her man-crazy pal Kandi. She fell hard for Quinn--and nearly fell apart when she learned of all his other women. Now Jaine has to figure out who finally stopped Quinn's cheatin' heart--before her best friend ends up behind bars. . .