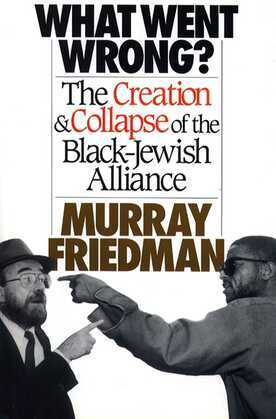 For nearly a century, blacks and Jews were allies in the struggle for civil rights and equality in America. Sometimes risking their lives, they waged battle in the courts, at lunch counters, and in the academy, advancing the cause of all minorities. Their historical partnership culminated in the landmark court decisions and rights legislation of the 1960s—achievements of which both groups are justly proud. But thereafter, black nationalist activists diverted the movement for civil rights into a race movement, distancing blacks from their traditional allies, and the old civil rights coalition began to disintegrate.

Today, relations between blacks and Jews may be at an all-time low. Hardy a month goes by without fresh outbreaks of hostility and conflict. Controversial figures like Louis Farrakhan, Khalid Mohammed, and Leonard Jeffries fuel Jewish fears about a rising tide of black anti-Semitism—fears that were horribly confirmed for many Jews by the anti-Jewish riots in Crown Heights in the summer of 1991—and blacks respond with bitter charges of Jewish hypocrisy and racism.

What went wrong between blacks and Jews? Historian Murray Friedman, also a long-time civil rights activist, takes this question as the starting point for the first authoritative history of black-Jewish relations in America. Friedman’s book traces this long and complex relationship from colonial times to the present, engaging the revisionists at every point. He argues that the future of this important American partnership lies in the outcome of the struggle currently under way between black radical nationalists and blacks seeking coalition with Jews and other whites. “Memory,” Friedman concludes, “is the only force that can bring about a reconciliation.”