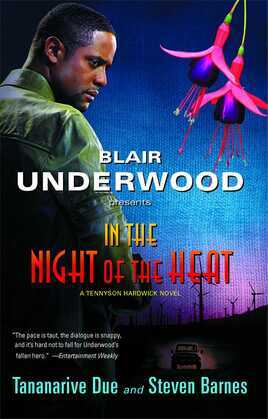 In the Night of the Heat

AWARD-WINNING ACTOR AND AUTHOR BLAIR UNDERWOOD JOINS FORCES WITH TWO AMAZING AND AWARD-WINNING AUTHORS TANANARIVE DUE AND STEVEN BARNES TO DELIVER THE SECOND INSTALLATION IN THE STUNNING AND PROVOCATIVE TENNYSON HARDWICK NOVEL IN THE NIGHT OF THE HEAT.

Threatened with death after acquittal for murder, football superstar T. D. Jackson asks struggling actor and former gigolo Tennyson Hardwick for protection. Tennyson has a reputation in Hollywood after solving the murder of rapper Afrodite, but politely turns Jackson down: His acting career is taking off with a new series, and he's trying to work out his personal life after a series of wrong turns.

But Tennyson's life is upturned when his seedy past catches up to him on the set of his TV series. Then T. D. Jackson is found dead in his home, the victim of an apparent suicide.

T.D.'s gorgeous cousin, Melanie, is sure the superstar was murdered, and Jackson's family offers Tennyson an irresistible fee to discover the truth. But prying into T. D. Jackson's death means answering the question that divided a nation and destroyed a film star and a football icon's life and career: Did T. D. Jackson kill his wife?

When the investigation takes an unexpected turn toward the governor's mansion and a long-forgotten football game in the segregated South of the 1960s, Tennyson uncovers secrets tearing at the heart of two dynasties and must rely on all of his assets -- his actor's heart, deadly hands, profiler's mind, and every other part of his body -- to keep from dying next.