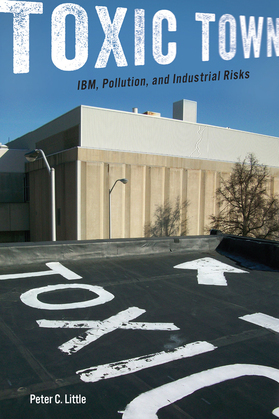 by Peter C. Little (Author)
Buy for $27.00 Excerpt
Nonfiction Social science Anthropology Science and technics Science Environmental science
warning_amber
One or more licenses for this book have been acquired by your organisation details

In 1924, IBM built its first plant in Endicott, New York. Now, Endicott is a contested toxic waste site. With its landscape thoroughly contaminated by carcinogens, Endicott is the subject of one of the nation’s largest corporate-state mitigation efforts. Yet despite the efforts of IBM and the U.S. government, Endicott residents remain skeptical that the mitigation systems employed were designed with their best interests at heart.

In Toxic Town, Peter C. Little tracks and critically diagnoses the experiences of Endicott residents as they learn to live with high-tech pollution, community transformation, scientific expertise, corporate-state power, and risk mitigation technologies. By weaving together the insights of anthropology, political ecology, disaster studies, and science and technology studies, the book explores questions of theoretical and practical import for understanding the politics of risk and the ironies of technological disaster response in a time when IBM’s stated mission is to build a “Smarter Planet.”

Little critically reflects on IBM’s new corporate tagline, arguing for a political ecology of corporate social and environmental responsibility and accountability that places the social and environmental politics of risk mitigation front and center. Ultimately, Little argues that we will need much more than hollow corporate taglines, claims of corporate responsibility, and attempts to mitigate high-tech disasters to truly build a smarter planet.