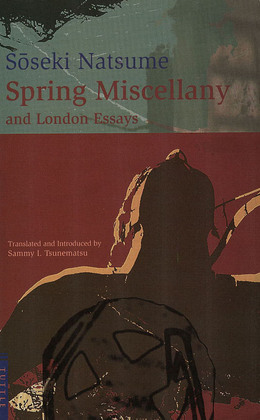 de Natsume,Soseki (Autor), Sammy I Tsunematsu (Traductor)
No Ficción Colecciones literarias Asiática
EPUB
Préstamos ilimitados, Uno a la vez
Detalles
For the first time, English readers have access to Soseki’s Spring Miscellany. Originally published as Eijitu Shohin in serial form in the Asahi newspaper in 1909, before appearing in book form, Spring Miscellany is an pastiche of twenty-five sketches, referred to as shohin (little items), heir to the great zuihitsu tradition of discursive prose. These personal vignettes are clearly autobiographical and reveal Soseki’s kaleidoscopic view of his private world and his interest in authentic, unadorned self-expression.

The stories range from from episodes from his youth to his adult musings. Of special interest are the accounts of Soseki’s stay in England between 1900 and 1902, where he attended University College, studied privately with W. J. Craig, editor of the Arden Shakespeare, and immersed himself in studying eighteenth-century literature. It was not a happy time for Soseki--he described his stay as “like a poor dog that had wandered into the company of wolves”--but, as with all great writers, he managed to turn adversity into raw material for his art and to give us insight today into the life of an expatriate Japanese scholar at the turn of the century.

In his Introduction to the work, Sammy Tsunematsu, founder and curator of the Soseki Museum in London, provides a fresh perspective on Soseki as a man and a writer, as well as an insightful commentary on the work itself.