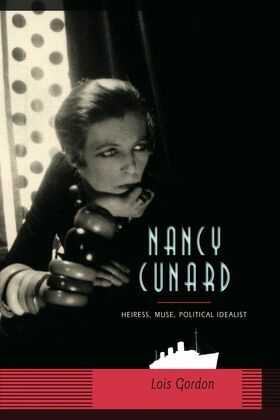 Lois Gordon's absorbing biography tells the story of a writer, activist, and cultural icon who embodied the dazzling energy and tumultuous spirit of her age, and whom William Carlos Williams once called "one of the major phenomena of history."

Nancy Cunard (1896-1965) led a life that surpasses Hollywood fantasy. The only child of an English baronet (and heir to the Cunard shipping fortune) and an American beauty, Cunard abandoned the world of a celebrated socialite and Jazz Age icon to pursue a lifelong battle against social injustice as a wartime journalist, humanitarian aid worker, and civil rights champion.

Cunard fought fascism on the battlefields of Spain and reported firsthand on the atrocities of the French concentration camps. Intelligent and beautiful, she romanced the great writers of her era, including three Nobel Prize winners, and was the inspiration for characters in the works of Ezra Pound, T. S. Eliot, Aldous Huxley, Pablo Neruda, Samuel Beckett, and Ernest Hemingway, among others.

Cunard was also a prolific poet, publisher, and translator and, after falling in love with a black American jazz pianist, became deeply committed to fighting for black rights. She edited the controversial anthology Negro, the first comprehensive study of the achievement and plight of blacks around the world. Her contributors included Langston Hughes, W. E. B. Du Bois, and Zora Neale Hurston, among scores of others.

Cunard's personal life was as complex as her public persona. Her involvement with the civil rights movement led her to be ridiculed and rejected by both family and friends. Throughout her life, she was plagued by insecurities and suffered a series of breakdowns, struggling with a sense of guilt over her promiscuous behavior and her ability to survive so much war and tragedy. Yet Cunard's writings also reveal an immense kindness and wit, as well as her renowned, often flamboyant defiance of prejudiced social conventions.

Drawing on diaries, correspondence, historical accounts, and the remembrances of others, Lois Gordon revisits the major movements of the first half of the twentieth century through the life of a truly gifted and extraordinary woman. She also returns Nancy Cunard to her rightful place as a major figure in the historical, social, and artistic events of a critical era.