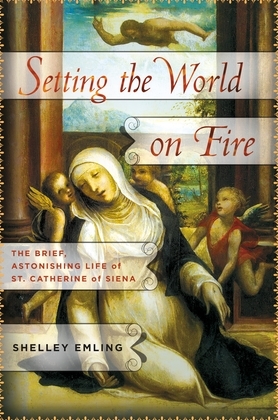 Setting the World on Fire

One of only two patron saints of Italy, the other being St. Francis of Assisi, St. Catherine was ahead of her time. As a political powerhouse in late 14th century Europe, a time of war, social unrest and one of the worst natural disasters of all time--the plague, she worked for peace between Christians while campaigning for a holy crusade against Muslims. She was illiterate but grew into a great writer by dictating to assistants. She was frail and punished herself mercilessly, often starving herself, while offering moral guidance and inspiration to kings, queens and popes.

It's easy to see why feminists through the years have sought to claim the patronage of St. Catherine. From her refusal to marry to her assertion that her physical appearance was of no importance, the famous Saint is ripe for modern interpretation. She was a peacemaker during Siena's revolution of 1368, sometimes addressing thousands of people in squares and streets; she convinced Pope Gregory XI to return the papacy to Rome at a time when the Catholic Church was unraveling.

How did this girl, the second-youngest of 25 children of a middle-class dyer, grow to become one of the most beloved spiritual figures of all time, a theological giant to rank alongside the likes of Thomas Aquinas? In Setting the World on Fire, Emling gives an intimate portrayal of this fascinating and revolutionary woman.