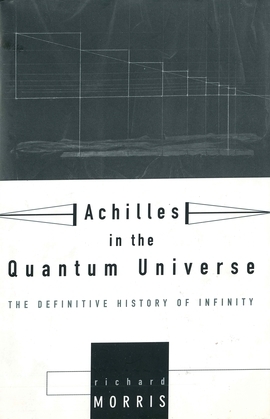 Achilles In the Quantum Universe

Centuries ago, when the ancient philosopher Zeno proposedhis famous paradox involving Achilles and the Tortoise, he struck at the heart of one of science's most enduring and intractable problems: How do we define the infinite? From then on, our greatest natural philosophers, logicians, mathematicians, and scientists, from Aristotle to Stephen Hawking, have been stymied­-and driven-by infinity.

Acclaimed Science writer Richard Morris guides us on a fascinating, literate and entertaining tour of the efforts made throughout history to make sense of the mind-bending concept of the infinite. In tracing this quest, Morris shows us how each new encounter with infinity drove the advancement of physics and mathematics. Along the way, we encounter such luminaries as Galileo and Newton, Tycho Brahe and Giordano Bruno, and the giants of modern physics: Planck, Einstein, Bohr, Feynmann, Hawking, and numerous others.

Beginning with simple logical puzzles and progressing to the latest cosmological theories, Morris shows how these same infinity problems helped spawn such groundbreaking scientific developments as relativity and quantum mechanics. Though in many ways, the infinite is just as baffling today as it was in antiquity, contemporary scientists are probing ever deeper into the nature of our universe and catching fleeting glimpses of the infinite in ways the ancients could never have imagined.

Ultimately, we see that hidden within the theoretical possibility of an infinite number of universes may lie the answers to some of humankind's most fundamental questions: Why is there something rather than nothing? Why are we here?