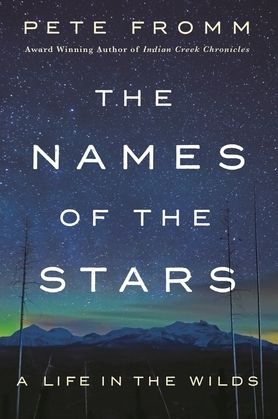 The Names of the Stars

Winner of Honor Book for the 2016 Montana Book Award

At twenty years old, Pete Fromm heard of a job babysitting salmon eggs, seven winter months alone in a tent in the Selway-Bitterroot Wilderness. Leaping at this chance to be a mountain man, with no experience in the wilds, he left the world. Thirteen years later, he published his beloved memoir of that winter, Indian Creek Chronicles ?Into the Wild with a twist.

Twenty five years later, he was asked to return to the wilderness to babysit more fish eggs. But no longer a footloose twenty year old, at forty-five, he was the father of two young sons. He left again, alone, straight into the heart of Montana?s Bob Marshall wilderness, walking a daily ten mile loop to his fish eggs through deer and elk and the highest density of grizzly bears in the lower 48 states.

The Names of the Stars is not only a story of wilderness and bears but also a trek through a life lived at its edges, showing how an impulsive kid transformed into a father without losing his love for the wilds. From loon calls echoing across Northwood lakes to the grim realities of life guarding in the Nevada desert, through the isolation of Indian Creek and years spent running the Snake and Rio Grande as a river ranger, Pete seeks out the source of this passion for wildness, as well as explores fatherhood and mortality and all the costs and risks and rewards of life lived on its own terms.