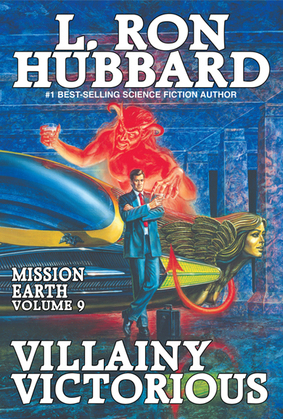 Mission Earth #9
by L. Ron Hubbard (Author)
Buy for $7.99 Excerpt
Fiction Science fiction English literature American and Canadian literature
warning_amber
One or more licenses for this book have been acquired by your organisation details

Earth is rising in the House of Voltar . . . And there’ll be hell to pay! That’s right. The invasion is on . . . and it’s coming soon to a galaxy near you. The action couldn’t be hotter, and the plot couldn’t be more diabolical. Earth is coming to Voltar—and the Voltarians won’t know what hit them.

Murder, blackmail, drugs, psychoanalysis, PR firms, sex-crazed teenyboppers, riots in the streets, women in chains. These are the powerful secret weapons of war—perfected on Earth and imported to Voltar—which are now being exploited by the ruthless Lombar Hisst, chief of the Coordinated Information Apparatus (the infamous CIA). His obsession: total domination of the Voltarian Confederacy.

Can anyone stop the madness? Does anyone have the courage and charisma to crash this party?

Enter Royal Officer of the Fleet, Jettero Heller. Dodging Death Battalions and death warrants, he’s racing from Earth to face the challenge. But Hisst has taken Heller’s beautiful sister hostage, and she may be the one who has to pay the ultimate price of VILLAINY VICTORIOUS.

“A superlative storyteller with total mastery of plot and pacing.” —Publishers Weekly