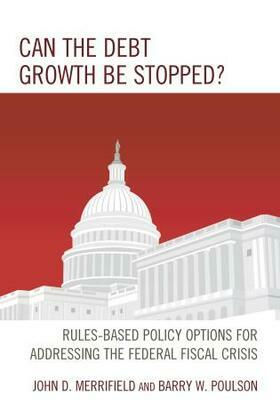 Can the Debt Growth Be Stopped?

This book explores new fiscal rules introduced in OECD countries and the relevance of fiscal rules for the unique fiscal policies and institutions in the United States. The rules in different countries are compared, with a more in depth analysis of two countries with arguably the most successful fiscal rules—Switzerland and Sweden. The study compares the challenge of fiscal consolidation facing the U.S. with that in other OECD countries. The centerpiece of the study is analysis of fiscal rules using a dynamic simulation model. A Swiss style fiscal rule is compared to an alternative fiscal rule proposed by Representative Amash, H.J.Res 24.The authors propose a new fiscal rule designed for the unique fiscal institutions in the U.S. Dynamic scoring is used to measure the impact of different fiscal rules on the federal budget, economic growth, and revenue. The effectiveness of the different fiscal rules is analyzed with respect to several criteria. A major objective of the rules is fiscal stabilization in the long run to bring debt/GDP ratios below tolerance levels. The fiscal rules are also designed for budget stabilization in the medium term, such that deficits in periods of recession are offset by surplus revenue in periods of economic expansion. The concluding section of the study explores the political economy of enacting new fiscal rules in the U.S. The study proposes fundamental changes in budget process required for the proposed fiscal rule to be effective. The study concludes with a discussion of alternative routes to enacting new fiscal rules, and the prospects for new fiscal rules to be enacted in the U.S.