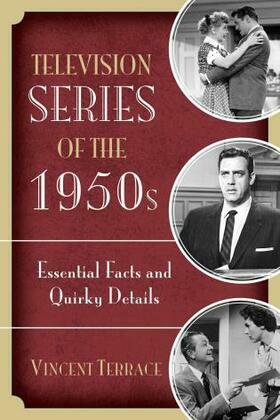 Television Series of the 1950s

Often regarded as the first golden era of television, the 1950s was a decade when many classic programs—from I Love Lucy and Gunsmoke to The Honeymooners and Perry Mason, among others—made their debuts. Even after these shows departed the airwaves, they lived on in syndication, entertaining several generations of viewers. Devoted and casual fans alike can probably remember basic facts about these shows—like the names of Lucy and Ricky’s neighbors or the town where Marshall Matt Dillon kept the law. But more elusive facts, like the location of the most successful defense attorney in Los Angeles (Suite 904 of the Brent Building), might be harder to recall.

In Television Series of the 1950s: Essential Facts and Quirky Details, Vincent Terrace presents readers with a cornucopia of information about 100 programs from the decade. Did you know, for example, that the middle initial of Dobie Gillis’ friend Maynard G. Krebs, stood for Walter? Or that Ralph Kramden’s electric bill came to only 39 cents a month? Or that on I Love Lucy, Ricky originally performed at Manhattan’s Tropicana Club? These are but a few of the hundreds of fun and intriguing trivia facts contained within this volume. Shows from all four networks (ABC, CBS, NBC, and DuMont)—as well as select syndicated programs—are represented here.

This is not a book of opinions or essays about specific television programs, but a treasure trove of the facts associated with each of these programs. Readers will discover a wealth of fascinating information that, for the most part, cannot be found anywhere else. In some cases, the factual data detailed herein is the only such documentation that exists currently on bygone shows of the era. Television Series of the 1950s is the ideal reference for fans of this decade and anyone looking to stump even the most knowledgeable trivia expert.