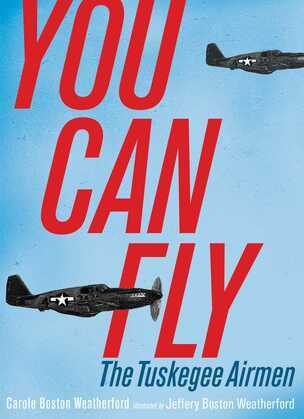 I WANT YOU! says the poster of Uncle Sam. But if you’re a young black man in 1940, he doesn’t want you in the cockpit of a war plane. Yet you are determined not to let that stop your dream of flying.

So when you hear of a civilian pilot training program at Tuskegee Institute, you leap at the chance. Soon you are learning engineering and mechanics, how to communicate in code, how to read a map. At last the day you’ve longed for is here: you are flying!

From training days in Alabama to combat on the front lines in Europe, this is the story of the Tuskegee Airmen, the groundbreaking African-American pilots of World War II. In vibrant second-person poems, Carole Boston Weatherford teams up for the first time with her son, artist Jeffery Weatherford, in a powerful and inspiring book that allows readers to fly, too.