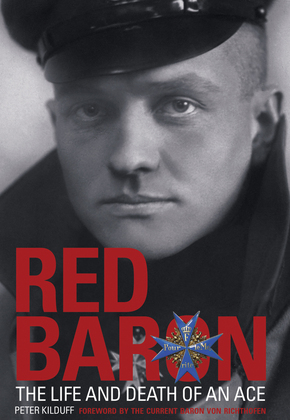 Red Baron: The Life and Death of an Ace

The classic bestselling autobiography of the most successful fighter pilot of the First World War.

This is the memoir of the undisputed top gun of World War I’s aerial war, Captain Manfred von Richthofen, who shot down 80 Allied aircraft. Originally published in German in late 1917 as Der Rote Kampfflieger (The Red Air Fighter), it was a runaway bestseller. The English language edition followed in 1918 without any official deal with the German publishers as it was argued that Richthofen’s accounts of combat against the Allied air force aircraft provided valuable intellilgence to use against the enemy.

Originally a cavalryman, Manfred transferred to the Imperial German Army Air Service in May 1915 and quickly distinguished himself as a fighter pilot. During 1917 he became leader of Jagdgeschwader 1. It was better known as the “Flying Circus” because of its aircraft’s bright colors and because the squadron moved like a traveling circus, from place to place as a self-contained unit so that it appeared wherever the fighting was the thickest. It would be operating at Verdun one week only to be north of Arras the next. A few days later, it would be down on the Somme.

Richthofen was a brilliant tactician, although his modus operandi was as simple as it was deadly. Typically, he would dive from above to attack with the advantage of the sun behind him (the victim would not see him coming, blinded by glare), with other pilots of his flying circus covering his rear and flanks. By 1918, he was regarded as a national hero in Germany and held the country’s highest honor, the “Blue Max.” Richthofen was well-known in the Allied countries and a respected advisor of military aviators.

Includes many of the Red Baron’s eighty combat reports, contemporary interviews with a selection of his surviving victims, and an extra chapter on the death in combat of von Richthofen.