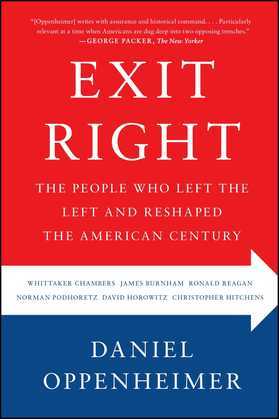 A provocative look at the evolution of America’s political soul through the lives of six political figures who abandoned the left and joined the right—“thoughtful…engaging…political history at a very high level…and the pages fly by” (The New Republic).

From the 1950s to the early 2000s millions of Americans moved left to right politically—a shift that forever changed the country. In Exit Right, Daniel Oppenheimer takes us from the height of the Communist Party’s popularity in America in the 1920s and 30s, through the Great Depression, World War II, the Cold War, the Civil Rights Movement, and up through conservative resurgence of the 80s, before ending with 9/11 and the dawn of the Iraq War. Throughout, he tells the stories of six major political figures whose lives spanned these turbulent times and whose changing politics reshaped the American soul: Whittaker Chambers, James Burnham, Ronald Reagan, Norman Podhoretz, David Horowitz, and Christopher Hitchens. As he maps out the paths that these six individuals have taken to conservatism, Oppenheimer explores the questions of why and how we come to believe politically at all. How do we come to trust one set of truths, or one set of candidates, or associate with one crowd of people—over all other alternatives?

Exit Right is an “absorbing” (The Atlantic) look at the roots of American politics. This is a book that will resonate with readers on the left and the right—as well as those stuck somewhere in the middle. Through six dramatic transformations of six enthralling characters, Oppenheimer “writes with the assurance and historical command of someone who has been thinking about his topic for a long time” (The New Yorker).