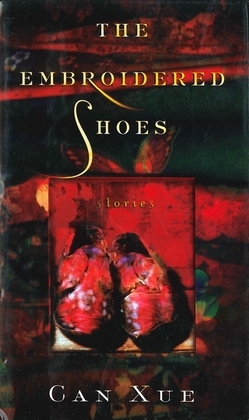 Can Xue (pronounced "tsan shway") is considered by many to be the most spirited, fearless, radical fiction writer to come out of contemporary China. Even her name is marked by tenacity (it's a pen name referring to dirty, leftover snow that refuses to melt). Her most important work to date, The Embroidered Shoes is a collection of lyrical, irreverent, sassy, wise, maddening, celebratory tales in which she explores the themes central to our contemporary lives: mortality, memory, imagination, and alienation. At times constructed like a set of graduated Chinese boxes, these New Gothic ghost stories build into philosophical and psychological conundrums that we ponder long after reading the final page. A doctor-detective-warrior who sleeps like a hippo in a cistern! A homicidal maniac housewife whose husband winds up in the hospital with a stomach full of very fine needles! These and many more strange, yet strangely recognizable, characters populate Can Xue's dream-ridden, transcendental territories. Written between 1986 and 1994, ten years after the death of Chairman Mao and during and following the 1989 Tiananmen massacre, The Embroidered Shoes is a life-affirming testament to the creative spirit.