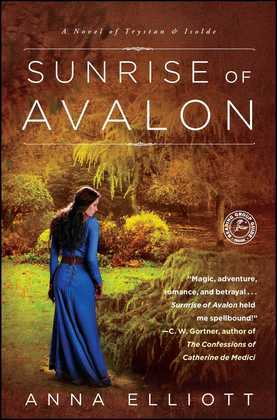 She is a healer, a storyteller, and a warrior. When Britain is faced with threats both old and new, the strength of her love may be the kingdom?s downfall . . . or salvation.

Their love has overcome endless obstacles. Never ones to shy away from danger, former High Queen Isolde and Trystan, a mercenary with a lonely and troubled past, have already endured a perilous journey to keep the underhanded Lord Marche from the throne of Britain. But now a new traitor lurks amongst the kings on Britain?s High Council?and just when they?ve realized the depth of their love for each other, a new danger calls Trystan from Isolde?s side to test the strength of their secret marriage vow. Only Isolde knows that she is carrying Trystan?s unborn child.

As Britain?s armies prepare for a final battle in which they will either turn back the tide of the invaders or see their kingdom utterly destroyed, Isolde must undertake yet another daring mission?one that will bring her even nearer to a secret that Trystan has kept for seven long years. As the clouds of war gather, Trystan and Isolde must once again fight to protect Britain?s throne. Together, they hold the key that can defeat the Saxon king, Octa of Kent, and Lord Marche. But the cost of Britain?s sovereignty may be their own forbidden love.

Based on the earliest written version of the Arthurian tales, Anna Elliott?s Sunrise of Avalon breathes new life into an age-old legend and brings the story of Trystan and Isolde to an unforgettable end.