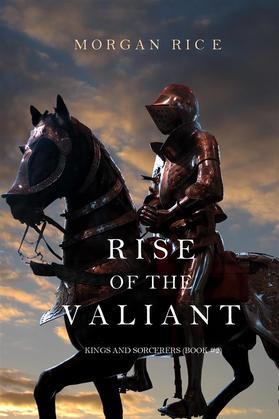 RIse of the Valiant (Kings and Sorcerers--Book 2)

“An action packed fantasy sure to please fans of Morgan Rice’s previous novels, along with fans of works such as The Inheritance Cycle by Christopher Paolini…. Fans of Young Adult Fiction will devour this latest work by Rice and beg for more.”
--The Wanderer, A Literary Journal (regarding Rise of the Dragons)

RISE OF THE VALIANT is book #2 in Morgan Rice’s bestselling epic fantasy series KINGS AND SORCERERS (which begins with RISE OF THE DRAGONS, a free download)!

In the wake of the dragon’s attack, Kyra is sent on an urgent quest: to cross Escalon and seek out her uncle in the mysterious Tower of Ur. The time has come for her to learn about who she is, who her mother is, and to train and develop her special powers. It will be a quest fraught with peril for a girl alone, Escalon filled with dangers from savage beasts and men alike—one that will require all of her strength to survive.

Her father, Duncan, must lead his men south, to the great water city of Esephus, to attempt to free his fellow countrymen from the iron grip of Pandesia. If he succeeds, he will have to journey to the treacherous Lake of Ire and then onto the icy peaks of Kos, where there live the toughest warriors of Escalon, men he will need to recruit if he has any chance of taking the capital.

Alec escapes with Marco from The Flames to find himself on the run through the Wood of Thorns, chased by exotic beasts. It is a harrowing journey through the night as he quests for his hometown, hoping to be reunited with his family. When he arrives, he is shocked by what he discovers.

Merk, despite his better judgment, turns back to help the girl, and finds himself, for the first time in his life, entangled in a stranger’s affairs. He will not forego his pilgrimage to the Tower of Ur, though, and he finds himself anguished as he realizes the tower is not what he expects.

Vesuvius spurs his giant as he leads the Trolls on their mission underground, attempting to bypass The Flames, while the dragon, Theos, has his own special mission on Escalon.

With its strong atmosphere and complex characters, RISE OF THE VALIANT is a sweeping saga of knights and warriors, of kings and lords, of honor and valor, of magic, destiny, monsters and dragons. It is a story of love and broken hearts, of deception, ambition and betrayal. It is fantasy at its finest, inviting us into a world that will live with us forever, one that will appeal to all ages and genders.

Book #3 in KINGS AND SORCERERS will be published soon.

“If you thought that there was no reason left for living after the end of the Sorcerer’s Ring series, you were wrong. Morgan Rice has come up with what promises to be another brilliant series, immersing us in a fantasy of trolls and dragons, of valor, honor, courage, magic and faith in your destiny. Morgan has managed again to produce a strong set of characters that make us cheer for them on every page.…Recommended for the permanent library of all readers that love a well-written fantasy.”
--Books and Movie Reviews, Roberto Mattos (regarding Rise of the Dragons)

“[The novel] succeeds—right from the start…. A superior fantasy…It begins, as it should, with one protagonist's struggles and moves neatly into a wider circle of knights, dragons, magic and monsters, and destiny.…All the trappings of high fantasy are here, from soldiers and battles to confrontations with self….A recommended winner for any who enjoy epic fantasy writing fueled by powerful, believable young adult protagonists.”
--Midwest Book Review, D. Donovan, eBook Reviewer (regarding Rise of the Dragons)

“A plot-driven novel that’s easy to read in a weekend…A good start to a promising series.”
--San Francisco Book Review (regarding Rise of the Dragons)