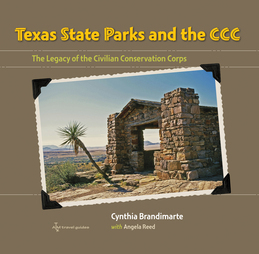 Texas State Parks and the CCC

by Cynthia A. Brandimarte (Author), Angela S. Reed (Author)
Buy for $9.99 Excerpt
Nonfiction Arts Architecture Historic preservation Travel Specialized guides Camping & caravaning
warning_amber
One or more licenses for this book have been acquired by your organisation details
From Palo Duro Canyon in the Panhandle to Lake Corpus Christi on the coast, from Balmorhea in far West Texas to Caddo Lake near the Louisiana border, the state parks of Texas are home not only to breathtaking natural beauty, but also to historic buildings and other structures built by the Civilian Conservation Corps (CCC) during the 1930s.

In Texas State Parks and the CCC: The Legacy of the Civilian Conservation Corps, Cynthia Brandimarte has mined the organization’s archives, as well as those of the Texas State Library and Archives Commission and the Texas Department of Transportation, to compile a rich visual record of how this New Deal program left an indelible stamp on many of the parks we still enjoy today.

Some fifty thousand men were enrolled in the CCC in Texas. Between 1933 and 1942, they constructed trails, cabins, concession buildings, bathhouses, dance pavilions, a hotel, and a motor court. Before they arrived, the state’s parklands consisted of fourteen parks on about 800 acres, but by the end of World War II, CCC workers had helped create a system of forty-eight parks on almost 60,000 acres throughout Texas.
Accompanied by many never-published images that reveal all aspects of the CCC in Texas, from architectural plans to camp life, Texas State Parks and the CCC covers the formation and development of the CCC and its design philosophy; the building of the parks and the daily experiences of the workers; the completion and management of the parks in the first decades after the war; and the ongoing process of maintaining and preserving the iconic structures that define the rustic, handcrafted look of the CCC.

With a call for greater appreciation of these historical resources, especially in light of the recent Bastrop fire, which threatened one of the state’s most popular CCC-era destinations, Brandimarte profiles twenty-nine parks, providing a descriptive history of each and information on its CCC company, the dates of CCC activity, and the CCC-built structures still existing within the park.
Protection
DRM Protected
Format
EPUB
Contributor
Carter Smith (Introduction author)
Publication date
January 05, 2013
Publisher
Texas A&M University Press
Collection
Texas A&M University Press
ISBN
9781603448253