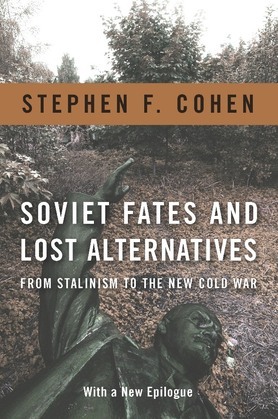 by Stephen Cohen (Author)
Buy for $31.99 Excerpt
Nonfiction Social science Political science History & theory History History by country Europe
warning_amber
One or more licenses for this book have been acquired by your organisation details

In this wide-ranging and acclaimed book, Stephen F. Cohen challenges conventional wisdom about the course of Soviet and post-Soviet history. Reexamining leaders from Nikolai Bukharin, Stalin's preeminent opponent, and Nikita Khrushchev to Mikhail Gorbachev and his rival Yegor Ligachev, Cohen shows that their defeated policies were viable alternatives and that their tragic personal fates shaped the Soviet Union and Russia today. Cohen's ramifying arguments include that Stalinism was not the predetermined outcome of the Communist Revolution; that the Soviet Union was reformable and its breakup avoidable; and that the opportunity for a real post-Cold War relationship with Russia was squandered in Washington, not in Moscow. This is revisionist history at its best, compelling readers to rethink fateful events of the twentieth and early twenty-first centuries and the possibilities ahead.

In his new epilogue, Cohen expands his analysis of U.S. policy toward post-Soviet Russia, tracing its development in the Clinton and Obama administrations and pointing to its initiation of a "new Cold War" that, he implies, has led to a fateful confrontation over Ukraine.